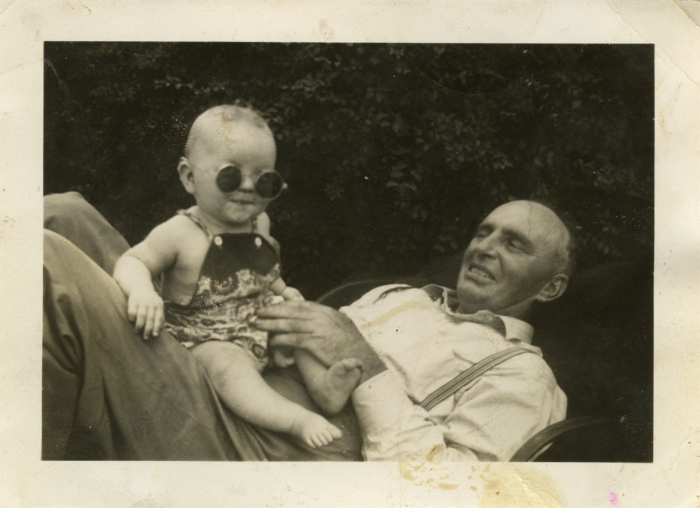 An obituary for my grandfather RAY WOLFE, from the Jackson Sentinel, September 16, 1941:

Rites At Delmar Thursday For Raymond B. Wolfe

DELMAR – An unusually large and sympathetic assemblage of the relatives, friends and acquaintances of the late Raymond B. Wolfe were gathered together in St. Patrick’s church at 9:00 o’clock Thursday morning, Sept. 11, to attend the funeral services. Requiem high mass was celebrated by the Rev. J. J. Hopkins, with the Rev. James Quinlan, of Charlotte, and the Rev. Herald O’Connor, of Lost Nation, as his assistants on the altar. Interment was made in St. Patrick’s cemetery, Delmar, with the Rev. J. J. Hopkins officiating at the ritualistic service. Eight members of Timber City Post No. 75, The American Legion, of Maquoketa, under the command of Glen Bailey, composed the firing squad, and Hugh Fletcher, bugler, sounding taps, as military honors were accorded the deceased veteran of the world war. Casket bears were also Legion comrades: Charles Rasmussen, Allen Bracket, Percy Cassin, Peter McGinn, Ralph Guise, and Dan Waters. Deceased was born October 27, 1896, the son of Morris [Maurice] and Sarah Wolfe, near Lost Nation. He married Gladys McGinn, of Delmar, on August 25, 1925, and they lived on a farm near Lost Nation before moving to Delmar. He was a veteran of the world war, and a member of Timber City Post No. 75, The American Legion. Besides his wife, he is survived by four small children, three daughters, Sarah [Sara], Mary and Marjorie [Margery], and one son, Thomas; and four brothers, Philip, John, Melvin and James, all of Lost Nation.