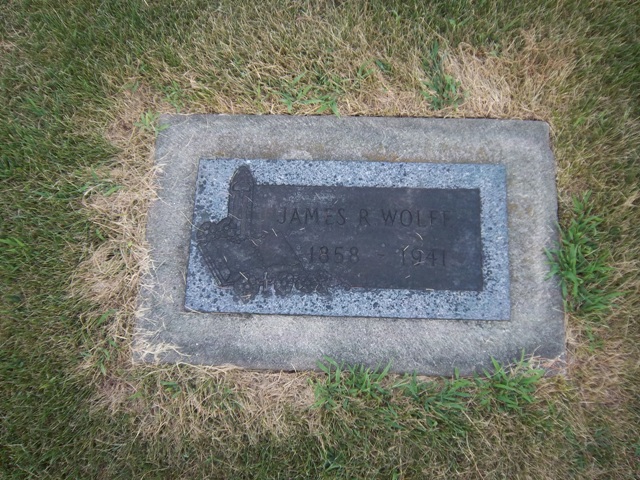 Wolfe’s parents were Irish Catholic immigrants, having arrived on a wave of Wolfe relatives in LaSalle County, Illinois, in 1849.

Johanna Wolfe died on June 24, 1903, in Ottawa, Illinois, and is buried with her husband at Saint Columba Cemetery in Ottawa.

The federal census of 1900 describes James Wolfe as a “grocery man.” He owned Wolfe’s Groceries, a business that advertised in the Republican Times of Ottawa on January 26, 1906:

Wolfe’s Groceries Taste Good
Because they are always fresh, first quality and all around dependable goods. Careful selections in buying, taking advantage of all discounts and low expenses make trading here economical and satisfactory. We know you can’t all come in person, so we make a specialty of filling telephone orders with the same care and promptness that we do orders that come over the counter. J.R. Wolfe, 921 LaSalle St. Phones: CU190 or Home 2338

The business appears not to have succeeded. The 1910 census describes Wolfe as doing odd jobs, and by 1920 he was working in a factory. At some point he and his family moved to Chicago, and in 1930 he worked as a package man in a dry goods store.

Wolfe died of bronchial pneumonia and a fractured femur on October 25, 1941, at Mercy Hospital in Chicago. He is buried at Saint Columba Cemetery in Ottawa.