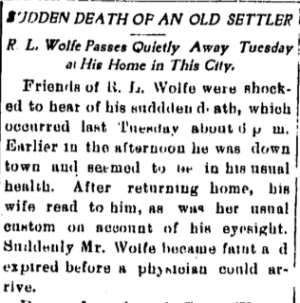 In 1848, Wolfe emigrated to the United States in the company of his parents and siblings. They sailed from Liverpool to New York, arriving on September 11. From there they traveled to LaSalle County, Illinois, where they joined relatives.

Many members of the extended Wolfe family made the same journey. Wolfe’s uncle John R. Wolfe, along with a cousin Maurice, emigrated together in 1847. Wolfe’s uncles Maurice R. and Richard sailed separately in 1849. Other cousins came as well, including Margaret and Elizabeth Maher, daughters of  John R. Wolfe’s sister Ellen; and Patrick, Dennis, Bridget, and Thomas Sheehan, the children of John R. Wolfe’s sister Margaret. Another cousin, John E. Wolfe, and his sisters Ellen J. and Mary Agatha, also emigrated. All of these Wolfes, except for the Sheehans, settled in LaSalle County, Illinois. A few moved on to Clinton County, Iowa, John R. Wolfe and his cousin Maurice.

Wolfe and his family initially farmed in Deer Park Township, LaSalle County. By 1870, however, they had moved to Grand Mound in Liberty Township, Clinton County, Iowa. A decade later, he lived 220 miles to the west, in Eden Township, Carroll County, where he boarded in the household of George W. Overmire. (Wolfe’s sister Ellen later married Joseph Overmire, perhaps this man’s brother.)

In 1889, Wolfe married Mary Fanning, of Ottawa, Illinois, in that city. Her obituary described her “highly educated and refined.” They had two children: Richard and Irene (b. 1892). Richard died sometime before 1900.

The family farmed in the town of Templeton, in Carroll County, about fifteen miles south of Carroll, and Wolfe served on the county board of supervisors. By 1900, they lived in Audubon, another fourteen miles south. Soon, however, they returned to Carroll, where they purchased a home on North Main Street.

Wolfe died unexpectedly on June 7, 1904, in Carroll. According to his obituary in the Carroll Sentinel, he was in downtown Carroll about six o’clock in the evening “and seemed to be in his usual health. After returning home, his wife read to him, as was her usual custom on account of his eyesight. Suddenly Mr. Wolfe became faint and expired before a physician could arrive.” Mary Fanning Wolfe died in Carroll in April 7, 1918, and she and her husband are buried together at Saint Columba Cemetery in Ottawa, Illinois.